I first heard about Dan when I joined GE Healthcare. His reputation as a super salesman was legendary. People would say, “He never loses a deal,” “His customers love him,” “He knows more about the customers than they do!” Of course Dan always ranked at the top of the charts on performance and on commissions.

You can imagine my excitement when my manager said I would get to train with Dan. I would be able to learn from the man, the myth, and the legend himself! I had two weeks to absorb all the information I could.

When the time came, I was not disappointed. Dan was six foot three, two hundred ten pounds, and spoke with a radio announcer’s voice. He looked permanentpressed in his fine tailored suit — I was in the presence of greatness. I learned a great deal from Dan in those two weeks about sales and about business. He always had a plan. He was a student of the game. He was a phenomenal communicator. He studied his customers and knew their needs, wants, desires, families, favorite foods, sports, and hobbies. He knew his customers’ “love language” — whether it was price or features or technology. He was a machine! Dan did nothing by accident.

One day during my training we stopped at one of Dan’s accounts. I wish I could remember the name of the gentleman I talked with. Dan was leaving a “footprint” (business card) in another office, and I had an opportunity to speak with the customer alone. I used the time to ask his advice on how I could be successful in my new position. He pointed toward the door Dan had just exited and said, “Study him!” The customer went on to explain that it wasn’t just Dan’s product
knowledge or sales skills that impressed him — it was the total package. It was Dan’s
consultative approach and the way he took the time to build trust — not just by
helping the customer solve problems but helping to avoid them altogether.

I did indeed study Dan, and I observed something else — his yearning to help.
Dan’s eagerness to share his thoughts, theories, and sales practices is genuine —
and his enthusiasm for sales is contagious. Just as he openly and thoughtfully
helped me over the course of my career, he offers the same generosity of spirit
and expertise to readers picking up this book. You are in for a treat! 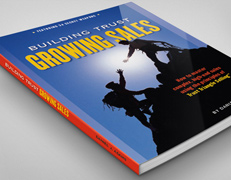